Stories across the Pond

It’s 3pm on January the 23rd, 2016: the alarm clocks go off altogether across Italy. Not only there, but in London, Frankfurt, Dublin, Copenhagen as well and in many other European cities the alarm clocks went off at the same time (or almost). The reason was the same everywhere: to wake Italy and Italian citizens up. To tell them to open their eyes and that IT’S TIME to let everyone have equal rights; not only for those who don’t have such rights yet, but for all Italian citizens’ dignity as well.

How about outside Europe, who let their alarm clock go off there? This morning, the GoogleMap showing the places where there was a flash mob taking place, looked like this:

GoogleMap showing the places of the Svagliatitalia flash mob

I am the little clock over Boston. Me and three other fellow countrymen (one had both American and Italian citizenship, so he could count for two). Unfortunately, the tight time, the snow and the 20°F didn’t let us organise the flash mob in Boston as they did in Italy. I’m sure that had we given it more notice, we would have got the attention of all those Italians living on this side of the Pond who, like the ones in Europe, care about equal civil rights for everyone. While I was making arrangements with Flavio Romani, president of Arcigay Italy, I told him that we probably wouldn’t have had a remarkable affluence of people. His answer was “However it turns out, even if you’re only 10 people, it’s the thought that counts”. Dear Flavio, we were not even 5 people but trust me on this one: there was the thought, the intention and the hope to see things changing for the better in Italy. 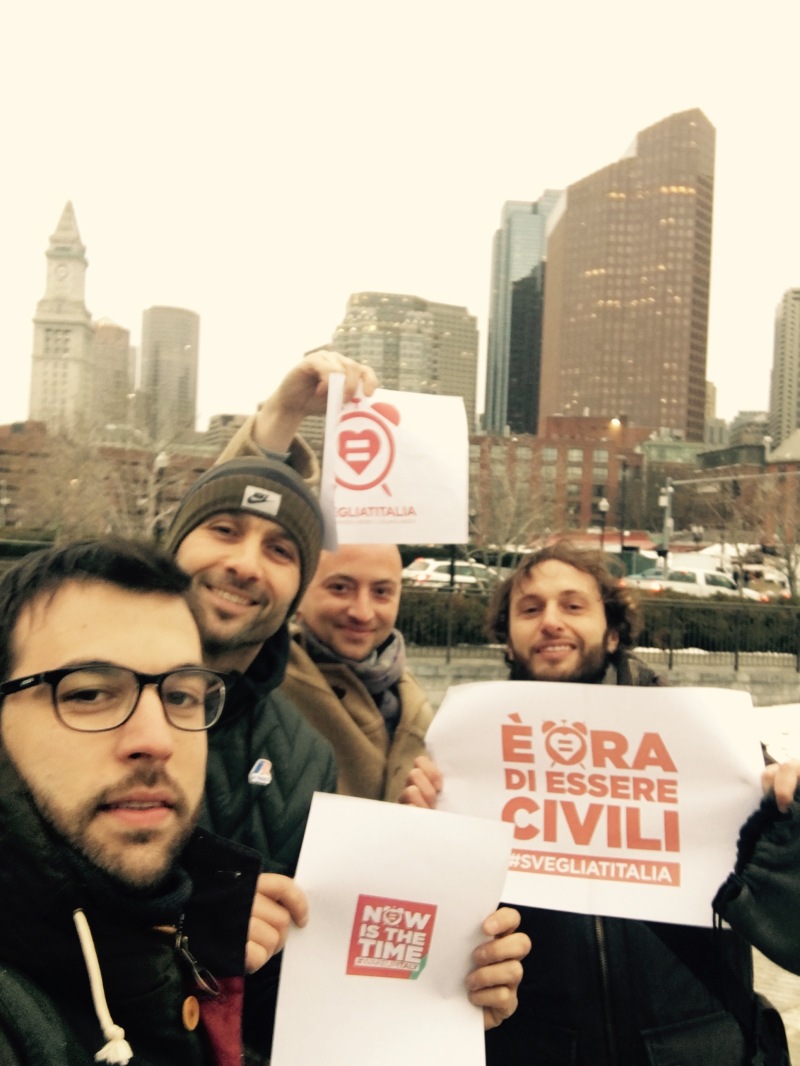 Matteo, Ricky, Fabrizio and I contributed with our alarm clocks from Boston

I’ve been living abroad for years, in England before and now in America, and often I’ve been told to be lucky because I live in a country where same-sex marriages are already legal and there’s nothing to fight for. Actually, that’s not completely true. Just like the recent stories of those Italians who flew to other countries to get married showed us, such marriages stop existing for my country the moment we cross the Alps. Sometimes, to see that happen, we don’t even have to cross those borders.

As it happened to Fabrizio, who was with me today and told me his story. Fabrizio crossed the ocean in 1999. In 2004 he met the man whom he fell in love with and who became his husband in 2008. So far so good, just like things should be for all those who meet someone to love for the rest of their life. “But it’s not that simple”, Fabrizio says. “Should we decide to move to Italy, even if Geoffrey is my husband, he could have a permit of residence but he couldn’t apply for citizenship.”

“If something happened to him while we’re in Italy, I wouldn’t be considered as his next of keen. His relatives in America would be called up. Furthermore, even if the law that is being discussed should pass, Geoffrey and I wouldn’t be ‘married’ in the eyes of Italy. We’d be ‘civil partners’ or whatever politically correct expression they’ll come up with in place of ‘married’. The word ‘husband’ or the status of ‘married’ wouldn’t show in any Italian official documents or forms, not even the ones from the Italian consulate here in Boston. That is, even before going to Italy. To me, this is some form of discrimination.”

This is something that occurred to my mind often times, even if I’ve never been married abroad. However, here I was: a gay man living abroad. When I had a British boyfriend, I knew that his European passport would have allowed him to work and live anywhere in the EU. From that point of view, a marriage wouldn’t change much. Still, I was trying to imagine how I would have felt in Italy, with my husband who somehow wasn’t my husband anymore but just a friend, a flatmate, a travel companion. I would have felt just like thousands of women and men feel today in my country. People who clash with a bureaucracy which is already hard to overcome and which makes things even more frustrating when those rules don’t allow you to tick the box next to “Married”, or “Husband”, or “Wife”. Those people have a ring on their finger and a heart full of love that swore to stay with their loved ones for a lifetime and beyond; yet, they’re unmarried or they’re single.

Today, thousands of alarm clocks went off across Italy. Four went off here in Boston too. I saw the pictures taken in those squares across my country, I saw the turnout of people, I saw the will to change things for the better. I saw my mother taking part in the flash mob in Rome and never before like today I felt so blessed. I saw my best friends and their parents holding a sign that said “Italy wake up”. No, they weren’t doing it for me. They weren’t doing it either for the rest of the gay couples in Italy, nor for those 530 thousand Italian children with same-sex parents, although, according to Italy, only one of the two is the “real” parent, the other is nothing. Above all, they were doing it for themselves, to be proud to live in a country that doesn’t discriminate, that doesn’t demean, that lets everyone have equal rights, that doesn’t allow the Vatican to interfere with our lives, that recognise people and couples for what they really are. A country that is not afraid to use the word “Married”.

That is, a civilised country.

Mother at the flash mob at Pantheon, Rome.

One thought on “Wake Up Italy”