Stories across the Channel

BEING GAY IS NOT A WOUND. OPEN LETTER TO PHILIPPE ARIÑO’S INTERVIEW

Last July Philippe Ariño released an interview “I, homosexual, tell you why the Catholic Church is right”, which

unfortunately hasn’t been translated into English yet (I’ll see to that!). Philippe is a French catholic gay man and acted as one of the main activists in France who fought against the legalisation of gay marriages. In his interview, he explains why the Vatican is right on what it says about homosexuality and why homosexuality itself must be worn like a wound on one’s body. His words took me back of over 10 years to 2002, when, as a practicing and convinced catholic, I was starting to gain awareness of myself and I was going through all those difficulties, doubts and questions that every young man, catholic or not, young or older, might feel when reading the same very interview. The only wound that I feel is not the one inflicted by my homosexuality, as Philippe wants us to think. Rather, it is the one opened by his same very words which make me be so sympathetic with who, today, is starting to gain awareness of oneself.

I decided to write my reply to his interview, which I’m not going to address to Philippe himself though: I’ve got nothing to say to him if not that his words might be very, very dangerous if misinterpreted. My reply is going to be addressed to John, thinking of him as any 15-year old boy or girl who perhaps attends a local religious community, or perhaps not, and who happened to come across this interview.

John is a fiction name, although that boy existed for real and I met him and I regret now for not being of more help to him as I might have been.

[…] Because Philippe doesn’t hide his homosexuality, he lays it under a different light than the stereotypes which the LGBT community boasts about.

You see John, the LGBT community doesn’t suggest stereotypes. Rather, it tries to over come them, showing all the various differences within the same, big community. There isn’t one way of being gay but simply a way of being yourself. The journalist who wrote that sentence still insists to see only one stereotype, the most banal cliches of them all, just like banal is what he wrote. That is, the gay man who waves his hand at any word he speaks and the lesbian woman with cropped hair who scratches the mail traits that she doesn’t have (just physically speaking, of course). Obviously, if that’s how you feel to be, go ahead then!

[…] To me, homosexuality is not something to be ashamed of. It is rather the fear of the differences among genders. It’s the lack of full acceptance of oneself and fear of sexuality.This fear left a wound inside me, which is hard to change.

Differences exist among genders as well as within the same gender. Saying that homosexuality is the fear of differences among genders is like saying that dog-breeding is the fear of cats and the rest of the animals or that falling in love with someone with your same skin’s colour equals to fear the rest of ethnicities out there. Homosexuality is just a word and perhaps you will get to give it a meaning which makes you feel better or perhaps not. It doesn’t matter because you will find that meaning eventually and you will be surprised to learn that it were inside you, not inside that label, and it says that you are a person before being anything else they want you to be and that there is not wound whatsoever inflicted by being gay. Philippe says to let the light of God go through that wound. If it’s the light of God that you are looking for and that you want to go through you, that is ok then and the fact that you are gay doesn’t mean that you have to give up on it. Just let that light go through your heart, not through a wound that, in reality, doesn’t exist.

[…] The Pope took a big step admitting the existence of a homosexual desire. Now he must explain that the same desire doesn’t justify homosexual practices.

You know what? Don’t even waste too long on trying to understand what “homosexual practice” means. They make it look like some sort or bureaucratic procedure, just like it happens in Italy when you need to get something done and you have to talk to and fill in 50 different people and papers. If chastity is what your heart suggests and that’s what you want, then choose that path. Nonetheless, that should be a way to feel closer to God and not a way to please someone or to expiate sins that you’ve never committed. To love and to feel the need to stay with the person you love is never a sin. Respect that and respect your own dignity and the dignity of that sentiment.

[…] We nee to remind ourselves of what homosexual behaviour means. It is a rejection of the genders’ differences, while love is acceptance of differences. Thus, one cannot say that rejecting differences among genders is love. To love, one must accept differences and diversities and not reject them. The homosexual  practice, in and of itself, is violent.

What I would like you to remember and keep in mind is just this: love constitutes acceptance of differences and diversities. The rest, you can avoid reading.

Love constitutes acceptance of differences and diversities. Whoever else than you is a difference and thinking that the only possible difference is the one between two genders is like dividing the whole multitude of life itself in two groups and assigning a ONE and a ZERO to the items of each group. Binary code, that is called so and whilst it works with computers, a lot of people will be surprised to learn that their computers work perfectly fine even when two ZERO or two ONE go along together. You are not a computer though. You are a difference and you can make the difference.

[…] There is a homophobia made of assaults, insults and violence. Nonetheless, coming out is a form of homophobia as well because it is a caricature, an act of violence toward one own sexual urge.

There is a big talking of coming out, as if it represents the ultimate goal that one has to reach to make the progressive bar on the screen go forward to complete the level. 10% – 30% – 70% 100%!! Well done, now you are a true gay! I say: come out with yourself. When you complete that level you’ll find out that coming out to your family, friends and the rest of the world (in case you need that) means being in peace and at ease with yourself and with what you are, with no shame left alone fear!

[…] The real homophobia comes from rejecting the differences among genders that each one of us belongs to. It comes from the homosexual practice and we can see it in many contests, in the affective relationships as well as in the prostitution environment. At least 90 of my friends have been raped. The media trivialised the real problems of homosexuality and that is just ridiculous.

Now, if you are a volunteer in a battered women’s shelter, you will obviously say that most of the women you know have been raped or beaten up. That doesn’t mean that most of the world’s woman population have gone through the same. What I’m trying to say is that perhaps Philippe hang around those kind of environments, considering also such a high number of friends! (In my case, 90 is not even the number of my Facebook friends…)

The greatest violence is the one that you will allow other people to inflict on you. Just like letting someone convince you that you are wrong, that what you are must be worn as a wound on your body, some kind of stigmata, and that letting that love become real will be an act of violence. John, be aware of what you are and what you want. Take care of it and respect it. And yes: the sooner you’ll learn how to protect yourself, the better. I’m sorry to say so, but you will need that! There will be no violence then, unless you let it.

John, whether you are a boy or a girl, a teenager, a 20-year old or someone older, whether you are a Christian, a religious person, an atheist or Jews; dear John, I just want you to know this: what you are is not a wound. Is not violence. Is not a stereotype, left alone fear of the other gender. What you are has a name, one and only one: yours.

Whatever people may say, happiness does exist, and it does for you too. 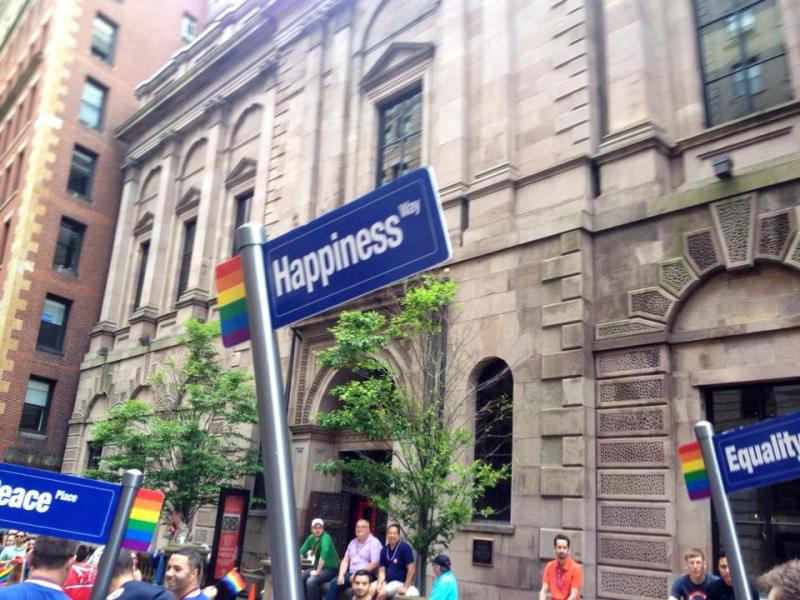 My Blog
Mark of Arabia