Stories across the Channel

From the 60’s to the 80’s across three countries

A recent email from my friend Dick gave me the idea for this article: three pieces of memory from three different decades in three different countries: the US, the UK and Italy.

My part, the last one, is of course the longest: as already discussed on this blog, the skill of being concise is not among the ones that God gifted me with.

Dick, USA, the late 60’s . The summer of 69 was just after the Stonewall Riots.  I was in Providence RI at my parents’ house finishing my master’s degree from NYU and reading all about the riots in the Village Voice and the NY Times.

That fall I had my first college teaching job and the following spring Nixon invaded Cambodia and there were a lot of demonstrations at campuses all over the country.  I can recall suspending classes and meeting with students on the lawns of the campus where we held “teach-ins” about why the US should get out of VietNam.

Ironically it was the antiwar movement which led to the summer love, pot, free sex and all the other good things that came out of that period along with the beginnings of the gay liberation movement.

America was in a foment and the youth were uniting against the establishment, corporations and the government.

You would have loved being alive in these times.  I miss them still and sometimes go to YouTube to listen to all the great folk music of that era:  Bob Dylan, Peter Seeger (who comes from across the river in Beacon) Joan Baez, etc.

William, UK, the 70’s. For me the 70’s started in the summer of 1970 when at the age of 10 I went to Senior School for the first time. To get there I had to take 2 buses on my own, it was exciting. In November the family moved closer to the school and that was when I first started to cycle.

In the new house was our first ever telephone which had a “party line” (you shared with another family in the street – pressing a button each time to check they were not on the line – or listening in if it was anything interesting).

The family still did not have a car so summer holidays were by coach to the same seaside resort in Broadstairs, where we went to up until 1975.

One year I remember going home in a Ford Zephyr 6 as a family we always met offered us a lift and which was a real treat!

But the 70’s woken me to the wider world, as school trips took me to Switzerland, France, Greece and the New Forest in Hampshire.

At the same time I was enlightened to a darker side: Watergate, the fall of Saigon, the energy crisis, the Munich massacre and the USSR invading Afghanistan, to name but a few.

Music saw the birth of Abba and the splitting of the Beatles.

The rise of punk and my first ever concert – The Stranglers.

The first floppy disc was invented and video games like Space Invaders, Pong and Snake saw the first light of day.

I got my first ever job at the age of 16, in Marks & Spencer’s and later in 1978 my second with the Norwich Union Insurance Company, which  the  following year saw its MD arrested for shoplifting ladies panties in M&S.

I got my first ever car in 1977, a yellow Ford Escort which in 1979 took me to university and a whole new life ahead of me in the glorious 80’s.

And finally the UK got its first ever female PM, Mrs Thatcher.

Paolo, Italy, the 80’s. I still remember our first phone in the house. It was the first half of the 80’s and if I have a clear memory of it, it cannot be anywhere before ’84. I don’t know if, even at that time, it was unusual for the average middle-class Italian families getting the first telephone so late or that’s just how it was supposed to be.

My friend Fabiana and I were playing on the living room’s floor, my Mum sitting on the sofa, perhaps watching TV or knitting (strangely, she used to knit a lot during her 30’s and doesn’t now that she is a Grandmother of one. And a half. The more she grows, the younger she gets!) My echoic memory (not as well developed as my olfactory memory) can still hear and reproduce the alien, never-heard noise which started as briskly as a glass crashing on the floor, taking us all aback, initially resembling a police car siren but then clearly too long to be that. Moreover, the noise was coming from inside, not outside! That area in the outskirts of Rome, which is where I was born and grew up, was much more like countryside at the time: traffic was limited to the local cars, despite the busy Via Casilina nearby and any new, unusual sounds where soon caught by our ears. I looked at Fabiana, who had stopped playing too and was staring back. Then I looked up at my Mum, who was now looking towards the door, where the sound was coming from the kitchen.

“What is it, Ma’?”, said I. She took some seconds to give the answer but then shot it out the moment she realized what that was.

“It’s the phone!” She stormed out the room, my friend and I following, perhaps more because an adult was acting so weirdly than because we really understood what she had said.

And then there she was: standing against the counter, speaking into the mouth piece, we kids looking in bewilderment. Who had called that day it’s far beyond my echoic or olfactory memory, and I will never know.

Some 25 years later that kid will have been writing this story on his “touch-screen tablet”, while sitting on a train speeding through London, listening to music coming from his “iPhone”, the screen flicking from time to time because of “emails” and “Facebook” notifications coming in. I still wonder what I would come up with to explain these four things to that 25-year ago child.

I have other random memories, distinctive of that decade: I remember Chernobyl, my Mum and her friends being dead-worried and people not wanting to buy milk. I also remember us children looking at the sky, waiting for the toxic cloud to pass by – I still try to picture in my mind what a toxic cloud looks like. I don’t have memories of the Aldo Moro’s kidnapping and his killing – I was way too young for that. I remember, though, the fact being mentioned after, but still too young to understand how that did change and imprinted into my country’s history. November 1989: I’m glad and happy that I still have in front of my eyes the images coming from the TV showing a whole lot of people knocking down a graffitied wall in a city called Berlin. Friends reunited and people hugging in the streets. I was 10 and a too much a little boy to understand what had just happened on a global level and what that was going to mean for Italy, a country just next door to Eastern Europe.

Nonetheless, if I have to give a memory which describes the middle-class Italian society of that period, there is one which repeated itself every summer, until early 90’s perhaps. As soon as the summer kicked off, Sundays were the day for hundreds of Roman families to embark, all together, at the same time, on one-day trips to the near seaside. We would all wake up at dawn on Sunday so to be on the road as early as possible and avoid being stuck in the traffic, just to find out, as soon as we entered the Ring Road, that tens of other families had had the same idea. I remember that sometimes I used to go to bed the night before with my swimming trunks already on, not because I wanted to gain some more minutes of sleep in the morning but just because going to the seaside was so exiting that I couldn’t wait, every time like the first time. My Dad would load his old blue Ford Escort with the beach umbrella, folding chairs, folding table, beach towels, pump to inflate my small dinghy along with the small dinghy itself, my beach toys, beachtennis rackets and of course, the inevitable fridge box to carry all that a family needs to survive one day on the beach: fruit juices, fresh fruits, coke and water. Bread, cheese and prosciutto to make us panini. Pasta salad, rice salad and sometimes even cold lasagna to eat on the beach together with the grain of sands blown by the sea breeze. I remember kilometer-wide beaches of fine sand where you could hardly find a spot for your umbrella, hundreds of families who for one day where sharing the same location, the same equipment, the same food, the same idea of fun. If the heat on the beach got too unbearable, we would all go to the nearby Pineta di Castel Fusano, a pinewood so thick where the Sun doesn’t get through and we would spend the rest of the day there.

Among all the memories from the 80’s, being stuck on the Via Cristoforo Colombo (the long road that connects Rome to Ostia) on a torrid summer day is by far the one I miss the least. 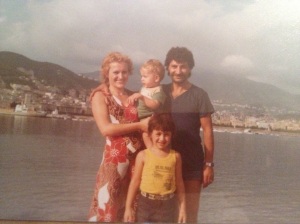 My family at the seaside, early 80’s

My Blog
Mark of Arabia