Moving to London. In 12 months.

Italian version of this article here.

The following is based on the general experience, not confirmed, of the average young Italian, aged between 20 and 25 (sometimes older) who wakes up one day and tells their mum: I’m moving to London.

Between month-one and three. You have just landed at Stansted with a 30-euro RyanAir flight to which you had to add 50 euros for a check-in extra weight a luggage where you stuffed even your espresso maker.

You booked a shared room with an on-floor shared bathroom in a hostel in the Bayswater / Marble Arch / Paddington area. You don’t have a job yet but you trust that in a week’s time you’ll have found one. Everything still has a holiday atmosphere to it; you take photographs of every red double-decker buses passing by but you have an Oyster card and that makes you feel like a local, even if the way it charges your journeys is still a mystery to you.

You haven’t learnt yet that stopping as soon as you you’ve crossed the ticket barriers at the Tube station is like jamming on your breaks while speeding at 150 km/hr on the fast lane of the Rome’s Ring Road; you keep doing it all the times.

You take pictures of every squirrel that you spot in Hyde Park and of every pink-haired, bizarrely-dressed person who crosses your path.

Between month-three and five. You find a job and a room in a flat to share with another three or four people, of whom at least two are Italians and/or Spanish.

You use the London public transport every day but the zone 3 still sounds like the furthest outskirts of Beirut; you keep calling the Piccadilly and District lines Blue and Green lines.

You still think you’ve got a God-given right to preach everyone when it comes to food; you queue at Starbucks and order an espresso just to for the satisfaction of gagging on it.

You believe with presumption that you can forecast the rain by glancing at the sky in the morning the way you used to do back home.

You cannot figure out yet how Brits can live without a bidet and this is the top topic of conversations with family and friends back home. That as well as carpeted floors all over the place which you still think be prohibited by the Italian Constitution.

By now you have your own bank account, despite the fact that to open one you needed a bill as a proof of address and in order to have a bill you had to sign up with a utility provider which required you to have a bank account. It is at this point you learn the meaning of the English phrase “Catch-22”.

The simple fact of owning a Tesco loyalty card makes you feel an active member of the English community.  It is right at Tesco that you will learn, with much disappointment, that UK’s supermarkets stop selling booze after 11.00 pm.

Between month-5 and 7. London’s buses have few secrets left for you. You learnt that the message “This bus is on diversion, please listen for further announcements” happens more often than a £80-monthly travel card might lead you to think. Now the Piccadilly, District and Central lines get called with the names they deserve. The Hammersmith & City, and the Bakerloo line, though, are still unknown territories and you prefer to refer to them by their designated colour; you still get surprised when spotting them on your Tube Map (do we really have a Pink line in London?).

You are still confused by the Overground and the rest of the National Railway trains but you are perfectly aware that the world doesn’t end at Vauxhall or Clapahm Junction; your life as a Londoner just doesn’t yet offer you enough reasons to venture too far beyond the zone-2 border.

You can recite the Tube map and your Oyster’s tariffs like Stephen Hawking would tell you how to create a black hole in your kitchen. That doesn’t mean they make sense to you in the slightest.

You stop screeching to a halt as soon as you have crossed the ticket barriers but you still happen to stand on the left side of the escalator. The way people (un)dress doesn’t surprise you anymore and you even stop noticing them.

For what concerns the squirrels, you can’t help it – you still snap a shot as soon as you see one.

Between month-7 and 9. You find yourself going to Tesco’s to get milk on a Saturday morning with your PJs on. No one will notice anyway and you stop caring as well.

Taking a bus and sitting on the lower deck still feels like drinking a rum-free Mojito – what’s the point?

You have your own circle of friends, most are Italian expats like you and then Spanish and Eastern-Europeans with whom you hang out and go to your favourite pubs (now you’ve got your own list of favourite pubs). Sometimes, on a late Saturday night, when you’re sitting (upstairs) on a night bus at 3.30 am forcing your eyes open to avoid missing your stop and your friend Jose next to you still has the stomach to drink from a Fosters can, you look outside the window. The London Eye is lit-up on the opposite side of the river; South Bank is still a swarm of people; the bridges’ lights cast eerie reflections on the water. You smile, produce your phone from your pocket and snap a shot that will never fully describe how you feel while you still cannot believe you really are here. 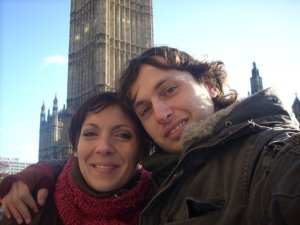 Me, Natalia and the Big Ben

Between month-9 and 11. You probably find a better place where to live, which you don’t have to share with more than two people. You come to the conclusion that London is much bigger than it looks like and that south the river can be a livable place too.

You definitely and officially stop being a tourist (apart for the squirrels, you still need to photograph them).

You feel now you have the given right to yell at those (Italian) tourists who stand on the wrong side of the escalator or stop as soon as after the barriers (the right might actually come with owning an Oyster card).

You roll your eyes each time you spot a sweet couple taking a selfie trying to get the whole Big Ben in the background. And yes, by then you should know that Big Ben is not the name of the tower but the name of the bell.

You mingled among the rest of the Londoners while you travel on the Tube, your music plugged into your ears, your colourful Converse on while you go to Camden Town those rare times when you really need some shopping done and not because the Lonely Planet guide suggests so; in fact, you tactically avoid going on a weekend.

You confidently walk through London’s narrow alleys, keeping the left side of the pavement and you greet the driver each time you get on a bus. If the BT line doesn’t work, you call their call centre with a I-got-this matter of fact and you master your English well enough to lead the call even with the toughest of the REPs from Glasgow.

You talk to your local friends and you name this or that other place on this or that other street just like you would do with your hometown. You stop complaining for each and every espresso that you dink; in fact, with all probabilities, you even stopped drinking espresso.

You get over the fact that clouds are a persistent feature of the sky. That doesn’t mean that you stop reminding everyone that in Italy we guys have 25 degrees even in March.

Your brain starts using the wrong lobes when speaking your mother tongue. More than often now you just use English words without bothering to figure out what the Italian is Rarely, but it does happen, you come up with italianization of English words, of which you yourself are ashamed just after. That is just how it works: one unlearns a language through the same very process one learns it.

Month-12: congrats, you’ve been living in London for a year! Perhaps you even live in zone 3 now and count one or two authentic British friends in your circle.

In the last twelve months you cursed this city much more than you have ever done with your home country. There were times when you felt frustrated, used and, above all, not understood and at least a couple of times you wondered “What the hell am I doing here?”

Get used to it, it keeps happening no matter how long you have lived here. The answer arrives each time you take a wrong turn and London surprises you with a narrow alley covered in cobblestones, a strip of blue sky in between the two opposite buildings and the sign to an old bookstore that sells antiques. Or each time you find a new pub (which probably is on the same alley you found by mistake), a few people inside and your favourite song from the 90s playing. Each time the sun is shading to orange at West while you’re crossing Battersea Bridge on your way home from work and it looks like that London created that moment just for you because that’s her way to tell you “Thanks for staying”.

Nonetheless, even after five years in London you will still be asserting with certainty that the algorithm as a function of which all the Oyster cards across the town work needs fixing.

One thought on “Moving to London. In 12 months.”